Falteringly I have become a gardener. Although not in any sense a typical gardener. I’ve become a Gardener for Nature. It started, at what was then our family home in Cumbria in northern England, in January 1983. But I now see it as every sensible person’s duty, in this Age of Extinctions, to welcome Nature back into our garden, our immediate outdoor living space. If you are any kind of naturalist, surely it makes sense, because almost certainly that’s where you will be spending most of your time, that is when you are not sitting beside a shining screen.

This short piece is a call to arms, or rather a call to tools. A plea for folk to get ecologically active in their garden wherever they live. For example, I myself am an alien where I live, having existed here in Africa only since 2005. So this is a request that people dig-in, wherever and whenever possible, get with an Ark-ival Rewilding Programme, right there “on your own plot”, no matter where or how small that parcel of ground might be. So please just try it and see!

This is a brief summary of one man’s very limited activities, during seven years in an area of almost one hectare, at an elevation of 1,400 metres on the southern slopes of a dormant volcano in Equatorial East Africa, to create what already has succeeded in becoming a very Strange Little Garden indeed.

It might seem perverse, someone lives within fifty miles of the fabled Ngorongoro, and the star-studded Serengeti, yet feels absolutely compelled to engage in what some might call “extreme wildlife gardening”. Or “adventure gardening” as I now prefer to think of it. Yet that is precisely what I am doing. A more mundane description of the aims of this endeavor might be: Maximising biodiversity per unit area. Yet I prefer above all: Gardening for Nature and for those with courage to feel it, it’s Gaia Gardening. Even here, in East Africa, the original home of the Big Game Safari, urban development is progressing so fast that the need to do something for nature is arguably even greater than it is in the declining nations of the North. As a peep through that hole in the hedge above will attest.

Gardening. Wilfully and manually disturbing an otherwise undisturbed, or unneeded, small piece of ground, in this case of one hectare – is to recreate a plot, a fragment, a shard, sliver, wedge or scrap of undeniably contrived wildness. It’s a small area, yet one where one hundred years ago there stood lofty semi-deciduous afro-montane forest, and where less than two hundred years ago black rhino, african buffalo and savanna elephants roamed, in numbers, browsing, bending and moulding the living landscape as if to their will.

A Wildness Garden does not mean that there should be no people actively participating in it! On these slopes of Mount Meru, for example, for as far back as we need to go, there have always been people, ‘hunter-gathering’, all around the mountain. After all this is a miniscule piece of land, but one in the middle of a continent where we humans first began to evolve, evolving In Nature. And to this day, especially in large parts of this huge continent of Africa, people remain a fundamental constituent of the wildness, “scratching a living” with a panga (aka machete, ‘cutlass’, bill-hook), with fire-stick and hoe from out of the forest and bush. Above all this is the continent where we the Super-Ape co-evolved with the rest of the fauna, and vice versa.

A Wildness Garden does require there are some restraints, by our more gentile Anthropocene standards, quite severe restraints on what should be done, and what should not be done, in order to get the best possible developments in the garden in the shortest possible time.

There should be no use of the agro-veterinary chemicals arsenal so beloved by the increasingly toxic mainstream – toxic at a global level that is, despite some apparent local improvements since Silent Spring in several of the more gentrified corner paddocks of our planet. There should be no pesticides, nor herbicides. Although I must admit that in our case there remains a disgusting rectangular cement-lined rubbish pit, deep in the garden-forest, where seemingly unavoidable domestic plastics, that feed a conservative family of four – our life-style packaging, must be “destroyed”. There are virtually none of the higher order public utilities functioning effectively hereabouts, compared with northern continental Europe for example.

To counter this there are many actions that must or should be done, again admittedly in my case, in an unavoidably ad hoc and flagrantly unscientific manner. Here, in brief are the Thirteen Steps that we have undertaken in order to rewild our plot into the exciting bird-filled “Sonic Shamba” that it is today!

We introduced simulated grazing and browsing. When we moved into our small-holding we gradually reduced the grazing pressure. Continued grazing by goats and sheep, chickens and geese, which severely constrained the ecosystem of the existing garden – maintaining a rather sterile grassland, dotted with ornamental alien saplings and flowering shrubs – was out of the question.

It had been my intention to maintain the regular presence of a single cow and her follower but that proved unworkable. Gradually, over the first three years, cattle grazing was phased out.

However simulated browsing, using pruning shears, clippers, secateurs and brute force with some ignorance, was maintained. Effort was concentrated especially upon the alien shrub community. Of whom the very rapidly proliferating exotic shrub – Lantana camara has been the most troublesome. However, in truth, working with Cherry-Pie Lantana, the indefatigable neotropical wayfaring bush, the “Curse of India”, the”American Bramble”, has provided the most difficult, and yet also the most profoundly insightful, dimension to this entire rewilding experience.

Cyclical or rotational disturbance of the ground. In essence this is further simulation of some of the activities of large herbivores, in this case upon the upper levels of the soil. At our location, in this garden, we attempted at first to simulate only some of the behavior of the recently excluded Masai hybrid-zebu cattle. But bearing in the back of the mind the knowledge that there used to be African Buffalo, Black Rhino and even forest living Elephant, trudging through here less than one hundred years ago, I gradually became a bit more creative with this disturbance! Thus the activities became more robust and we supplemented the destruction and removal of unwanted plant material with importation of what I perceived as some elements that were key to the whole rewilding process.

We began the importation to the plot of indigenous forest leaf-litter, and some forest fruits and indigenous seeds, dry twigs, bark and branches, from the nearest available ‘sustainable sources’.

We began the importation of wherever possible ‘totally’ organic cattle dung from neighbouring areas that were still being grazed by the local Mwarusha Masai zebu-hybrid cattle.

We engaged in the importation of elephant and buffalo dung on a very few occasions only; basically whenever a convenient and accessible source presented itself.

Extirpation of some of the least wanted alien trees, shrubs and ruderals – “weeds” to the eco-fundamentalists – those botanic racists who seem to believe, after five hundred years and more of globalization, that even at the continental scale, all of the bolted horses can be put back into the stables.

We proceeded with the gradual elimination, so far as is possible, of “unhelpful” exotic herbaceous perennials – an almost entirely alien ground flora (especially of the Compositae) – on the assumption that, at this location, an indigenous ground flora would support far more invertebrates, and therefore attract a much greater diversity of birds into the garden. For the first two years I observed closely who ate what. If nobody – whether invert or herp, bird or mammal -seemed interested in eating any product from a particular alien plant species then that species was deemed unhelpful to the programme!

We gradually expanded a programme of alien suppression. The gradual elimination of exotic ornamental tree species began in 2008. Wherever feasible we lopped, pollarded, coppiced, felled and removed – if that was acceptable to the aesthetic dictates of my own family, of our close friends and some near-residents – several trees that had been planted by the late owners, some fifteen years ago. Note that in January 2007 there was only one indigenous tree on the whole plot, near the vehicle gate, an African acacia.

We have undertaken the provision of supplementary food in the dry season to some bird species. This has been chiefly in the form of various African millets (mostly yellow millet) which are scatter-spread (broadcast) in cleared areas, and latterly in the glades that are forming within our rapidly evolving neophyte woodland.

During the recently expired La Niña sequence, which lasted from 2008 – 2013, it proved essential to provide a little grey-water to some of the indigenous saplings, especially those which we had planted in those early years, before I realised that planting was in itself “unnatural” and contrary to “the necessary rewilding flow of our times”. In any case grey-watering was ineffective largely due to the amount of watering that would have been required to establish indigenous trees in the wrong places. Places where they, themselves, had not chosen to grow. Scattering seed is fine, just as mulching with an open mind is best, and some assistance, to self-sown tree seedlings, especially in their early stages, is often a necessity! Nowadays, given the exponential urbanisation of this hill in the past five years, the pressure that has put upon our village’s gravity-fed piped water supplies, we can only afford to water plants that are growing in areas immediately around the house.

The suppression of cats: well, despite the ‘damage’ they do to the bird fauna, the feral-domestic cats are part of another story. Suffice to say we ourselves have none, there was an occasional wild cat that came here to hunt when we first moved in, and we were surrounded by fields, but nowadays, it’s nearly all cement, and our dearest neighbours, well they have six! Nevertheless being such a socialistic greeny-pacifist I have yet to resort to any action more violent than dodging off into the tangles, shouting and stone throwing! 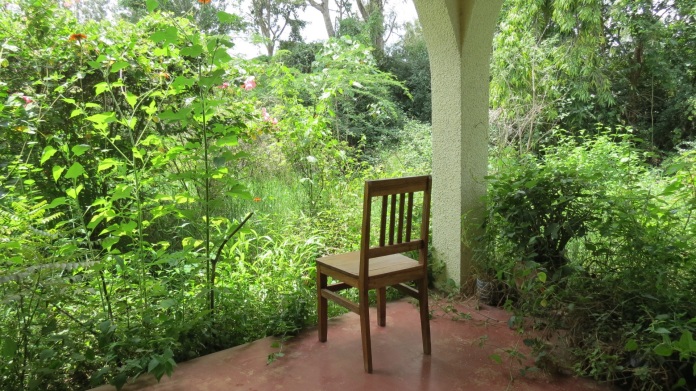 One thought on “Our Strange Little Garden – Earth”