Mount Meru viewed from the edge of the Aga Khan University estate. Our Wilding Wedge of a garden is in the shamba-suburban foothills under that lowest wisp of cloud.

For over a month I’ve been getting the garden ready.  Our wilding wedge beneath the steel grey pyramid of Meru. A rented hectare outside Arusha in East Africa, at a kilometre and a half above the sea. It’s an ever-changing tangled patchwork of exotic, alien hard-browsed Lantana camara in glade-thicket-and-brake. An experiment in non-racist eco-gardening, style ZooBotany-C21. An experiment by the Woolly Rhinoceros himself. A garden of vines, creepers and rank meadow flowers sheltering soft shaded fungi and an impressive annual increment of often noisy mini-beasts.

Thrush Nightingale photographed in the garden of Geoff and Anabel Harries, in Arusha.

Below all it’s a life amongst and under trees. Exotics, aliens and, for the past seven years since we moved-in, the “Indigenous Pioneers” protected by guerrilla units of the IVF – the Indigenous Vegetation Front. There’s Croton of two species, the stately large-leaved Cordia africana, many little babies of the toweringly exquisite, formerly revered Newtonia. A tree of spirits revered around WaArusha and WaMeru farmsteads prior to the conquest of East Africa by the Middle Eastern God, and those godless Mammonites who followed Him. And more recently there’s been lots of hazel-like Sandpaper Bush springing up around the plot. Yes I’ve been getting it ready.  Readying a garden fit for Nightingales.

The garden as seen from the balcony near the front door on a recent grey morning. Today’s Eastern Nightingale was under a bough in the top right corner of the photo.

So we’re now officially ready to help those sweet thrush-voiced grey-breasted nightingales, here for the duration, from the Baltic states and Russia Luscinia luscinia, and the cleaner looking, fawn-topped Mongolian nightingales L. – megarhynchos – golzii. As they help me. And to help those passing eye-browed blue Irania, out of some desert ‘stan, as they help me. Or gentle grey striata flycatchers, who’ve flown here from the as yet relatively healthy eastern edges of EU-trophia. I imagine the places. Places not unlike those I recall from a mixed-farming youth, where milk cows amble up and down the lanes, browsing the hedges as they go, where cattle generally are still allowed to host the occasional gut parasite, such that their dung is no longer toxic to all those fly and beetle species who were (formerly) tasked with recycling it. Semi-organic land, of farms where BIGPharma has yet to squeeze the living countryside. Land not yet hollowed-out, or enclosed and then constricted, in the hallowed name of Growth for Profit. Yes, here’s some blasphemy, as we prepare Farmageddon.

I’m here to help skulking lbj warblers, migrants who still eek out a living amongst Eurasia’s mercantilist confusion. And to help vociferous glittering gems, Afrotropical cuckoos, that fly here to parasitise our breeding birds, after a dry season spent bashing caterpillars against twigs in the leafy heart of the great Congo forest. Just as they help me! All of them. Let’s not forget the flitting swallows, the scything swifts and ethereal floating nightjars, all of them, these migrant birds. Feathered lives from far away, hatched in nests they’ve hidden where only the geotrackers go!

A male Irania ‘performing well’ on a juniper in Uzbekistan. Photo: Steve Rooke.

Just as they help me. Yep! It’s been a Birden of Love.

Since November started, most days it rains. And my avian rewards they are dropping in. The original Manna from Heaven. Just today, on November 6 in the morning, not half an hour ago, when the dark rains eased, as I was snapping spindly Lantana shoots beside the puddled green cement of the basketball court, there was a sharp flutter of wings – right against my ear. And there on the bough just ahead of me, at eye level, was the perfect eyebrowed fawn-and-tan form of a “chucking” Eastern Nightingale. I watched entranced as that out-of-the-sky golzii bounded along the grey lichened bough.

Eastern Nightingale in Arusha in 2007 photographed by Anabel Harries

A gorgeous bundle of energy. A small bird, relieved, a bird who might have been singing late last May along a briar bedecked stream next to a Mongol yurt.

Birders on a Sunbird/Wings nature holiday scan a valley near Samarkand for Central Asian specialities which mostly winter in Eastern Africa. The mountains of Tajikistan are just visible in the background. Photo: Steve Rooke.

That’s why I so love these long distance migrant birds. In an instant they can fix us in the living, utterly interconnected, planet. So I can’t help but think. Where was that Nightingale skulking at Halloween, or on Midsummer’s afternoon, where was this lovely nightingale on passage last May Day? Yes, what was the world like, where this little brown bird was then? The same but a different world  – somewhere – out there. Out there far beyond this garden hedge. Way beyond my ken, but still sheltering in my heart. If I can help birds like these I will. I’ve got no further cash to fund yet more research. No more money for endless meetings between the good and the bad. I’m in no way content, not any longer, to entrust their future to a salaried caste of bureaucrats. Woefully corrupt or otherwise fallen. That’s why I do my biggest bit in the garden. Wherever that garden might be. Staggering, sweating, kneeling before the Mother of God. Until the last breath I take. Until that day when I can no longer raise my Faroffskis, nor hold these Mammoth secateurs. 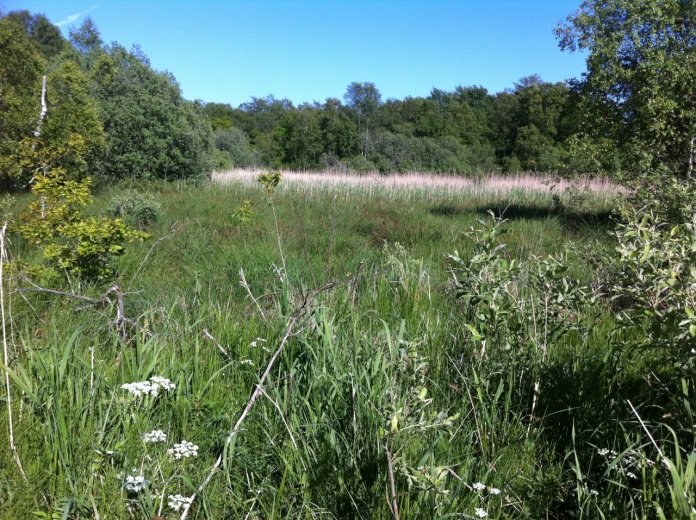 Linnaeus was briefly here in June, and doubtless listening to Thrush Nightingales, nearly three hundred years ago. A swampy area in the forest at Ottenby, Sweden.